Welcome to the first in what we plan to be a series of features on book collectors and home libraries in Georgia and around the South. 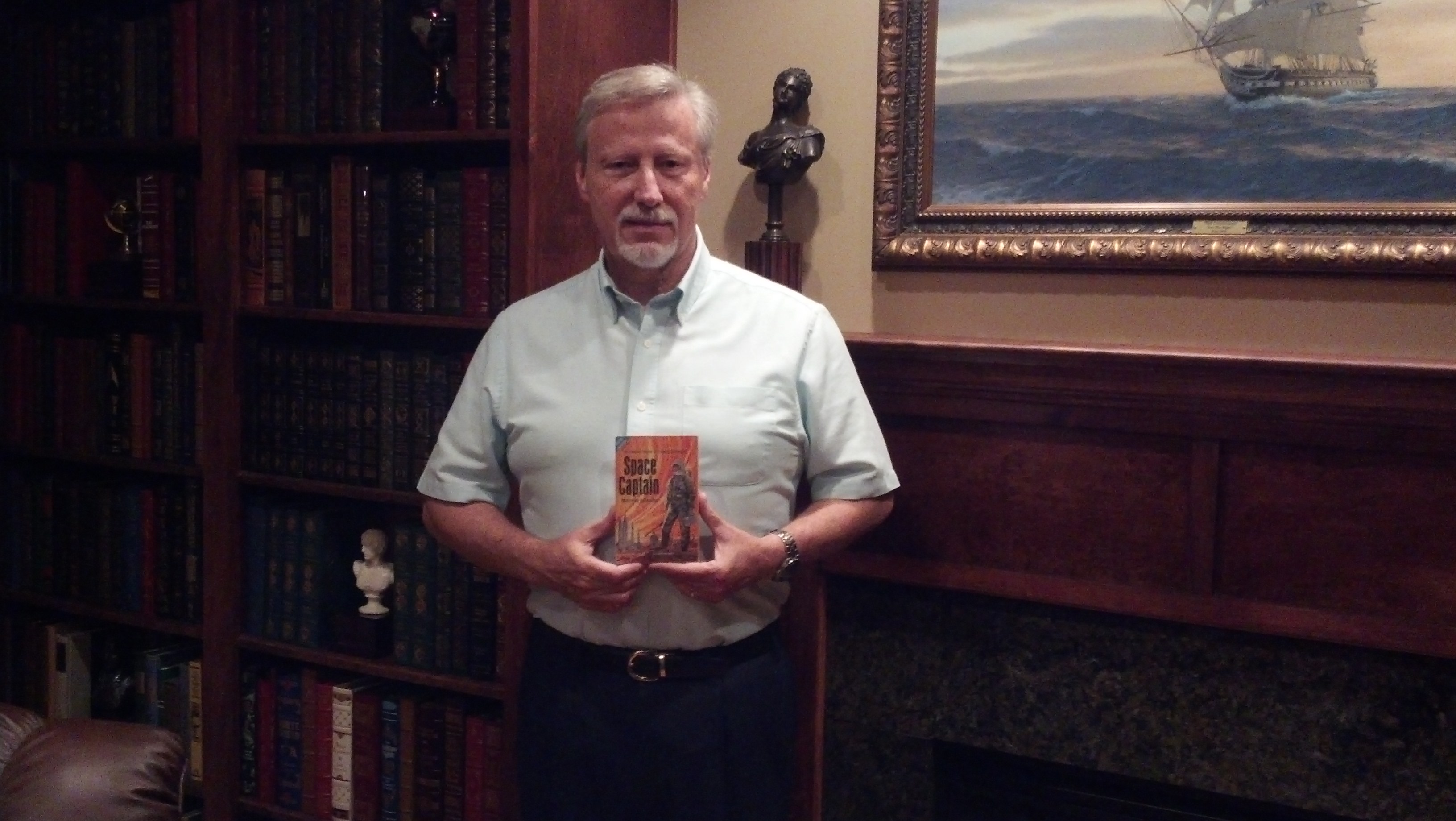 Collector Gilbert Huey with the first book he ever bought with his own money.

For the first year after opening Underground Books, I continued working part-time at my previous job, bar-tending at the Alley Cat, Carrollton’s wonderfully grungy college hipster dive bar. In the early days of the shop I was still doing the spring and summer circuit of Saturday morning yard sales in the region, hunting for inventory for the shelves of the still new store (this was before hundreds of books were pouring in the door every week).  One particular Saturday morning, I had dragged myself out of bed before 8am (despite having closed the bar late the previous night and gone to bed at 3am) to scout the numerous sales happening that day. Not only do you have to go early to find anything on this circuit, I had a narrow window to scout before opening the store at 11am. At a neighborhood-wide community yard sale, I ended up in what turned out to be Gilbert Huey’s driveway looking through a couple boxes of books.

“Hey, you’re the underground bookstore guy aren’t you?” he said.  “You want to see my library?” Gilbert had been in the store several times, and my first memory of meeting him was when he told me about  an exhibit he had put together of collectible and first edition children’s book classics in the local public library’s gallery room.  I had gone to check it out a week or two later, and had really enjoyed it, but hadn’t seen him since. Through my bleary eyed and sleep deprived fog, I nodded and told him I’d love to see his collection.

As I followed him into the house through the garage and up some stairs, he explained that he and his wife Sandra had finished out a section of their second story attic as a dedicated home library. This did not prepare me however, for what I saw when he opened the door at the top of the stairs and he welcomed me into a home library unlike any I’d seen. I think I turned around to look back out the doorway to make sure it wasn’t a magical wardrobe we’d just passed through.

The Hueys’ library evokes the classical ideal of a home library, with comfy leather chairs, warm lighting, darkly built-in wood bookshelves and wainscot panels, fine art, accessories like an antique telescope, typewriter, and globe. Beautiful, inviting, and cozy, this screen-free and windowless retreat is the perfect place to escape the chaos of the world outside and quiet the mind with a good book or thoughtful conversation with a friend over a drink. 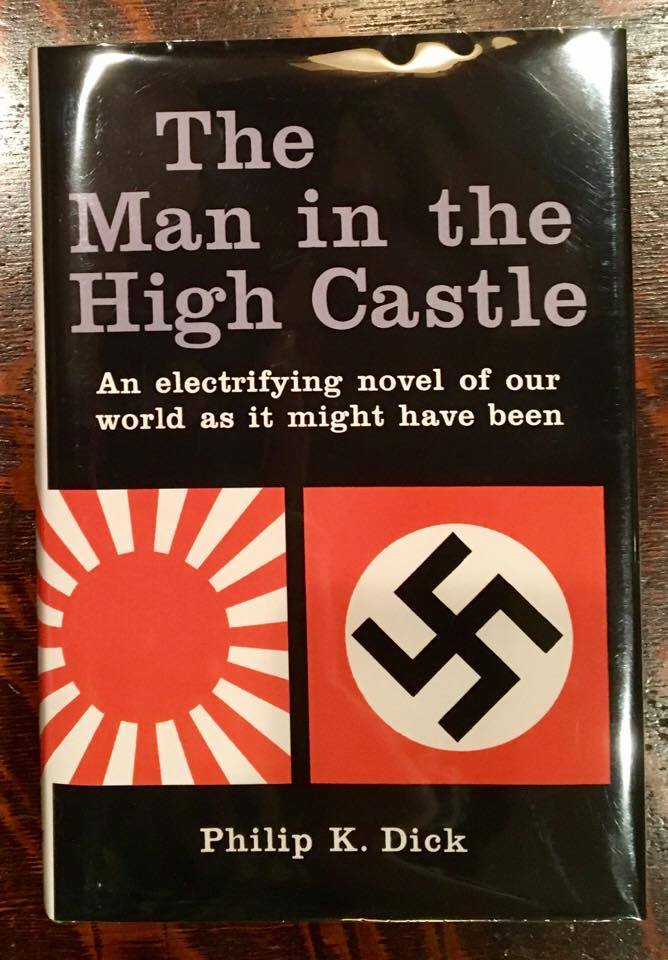 I recently enjoyed the opportunity to return to Gilbert's extraordinary home library and explore his impeccable collection. I’ve gotten to know Gilbert better a little at a time over the 5+ years since that initial chance visit to his home library, learning to appreciate his particular collecting interests and habits. An engineer by trade, he’s meticulous – not only about the condition and care of his collection, but in his steadfast completism (the collecting of every title by a specific author, in a series, or of every major work in a niche area of interest).  Inspired to collect books from a young age, he recounted the story of the first time he purchased a book with his own money, when he was just 9 years old. It was in a drugstore in Wedowee, Alabama in 1962, and the book was from a series of short sci-fi novellas called “Ace Doubles,” small pulp-style paperbacks with two novels in one book. There’s cover art for a story on one side, then you flip it over, and there’s cover art for another novel on the back half of the book. The second book he bought was the The Man in the High Castle by Philip K. Dick. “I reread it again in my twenties, I knew I didn’t ‘get it’ when I was nine. I only liked it then because it had the map of the United States split with Germany and Japan, with the two countries' flags. I thought it was going to be all about actual battles.”   A true collector from the get-go, he still has both of these initial book purchases.

Like many baby boomers, President Kennedy’s announcement in 1961 that the USA would put a man on the moon by the end of the decade captured his imagination. The incredible proliferation of science fiction writing at the time gave ample opportunity to imagine all the possibilities of the coming space age. The exposure to all these new ideas through his reading had a tremendous influence on Huey and eventually led him to study engineering. "I wanted to become an aerospace engineer and work for NASA or Boeing or Grumman, but by the time I started college the space program was winding down," he told me. "There were no aerospace jobs anywhere in the country much less in the south. So I became a Quality Assurance Engineer, a much less exciting career path, but it did allow me to buy books." After decades of collecting, Huey now has complete collections of first editions, most signed, of all the Hugo and Nebula award winners (the two major awards for work in science fiction and fantasy awarded by World Science Fiction Society and the Science Fiction and Fantasy Writers of America respectively) and collections of most or all of the works of many of the giants of 20th century science fiction such as Robert Heinlein, Ray Bradbury, Arthur C. Clarke, Philip K. Dick, Roger Zelazny, and many others. 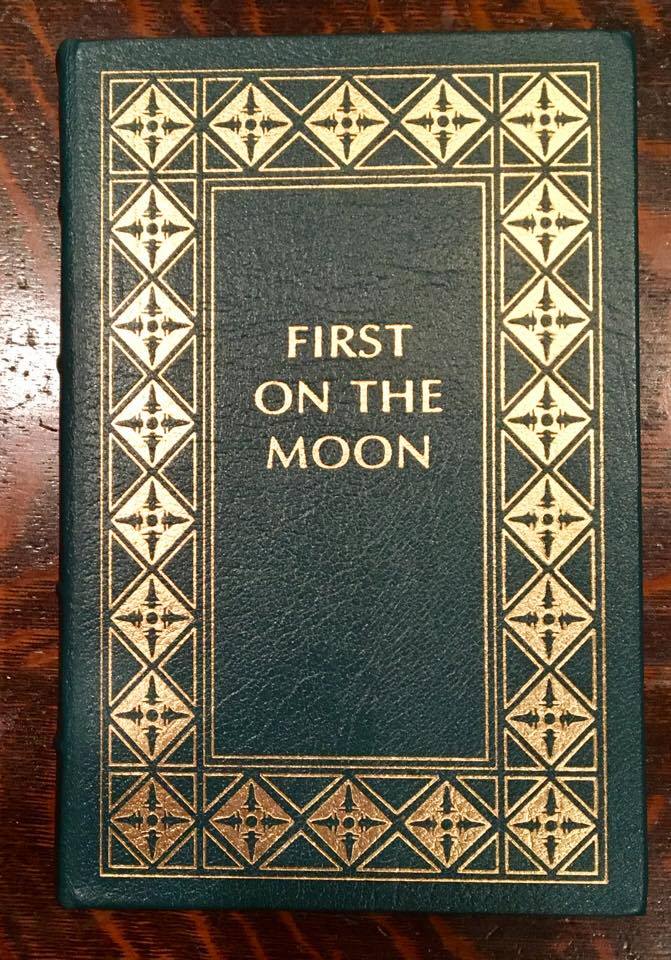 While he started out collecting science fiction, Huey eventually started collecting books and materials related to NASA and the actual real-life (not science fiction) space program. Out of the substantial collection, he picked one specific title to share that really stood out to me as exceptional:  a leather bound Easton Press first edition of First on the Moon (by the first three astronauts on the moon) that he sent to the famous space illustrator and official NASA artist Robert McCall, who added an amazing hand drawn illustration on the endpapers. Huey then proceeded to get everyone he could find who was close to the space program’s moon landing to sign it. Here’s Gilbert, explaining just a sampling of the signatures in the book:

Huey:  Robert McCall, this famous space artist, he called me one night after I sent him the book, he said, “What exactly do you want me to do in this book?” I said, “Just draw me the moon module landing.” Well he did this whole thing, then Buzz Aldrin signed it. Ray Bradbury was in London during the landing of Apollo 11, and he appeared on TV, Dick Cavett was interviewing him. [He was the] London voice for Apollo. That’s Walter Cronkite over there. Wally Schirra was one of the announcers. Paul Haney, he was the P.A.O. (Public Affairs Office) for NASA, the voice for NASA back in the 60s. Most of these guys are dead now. All of them. Every one of these actually. I did this several years ago. It’s full of them. Thomas Kelly was the engineer that created the lunar module. Dee O’Hara was the nurse. Here’s the head of NASA. 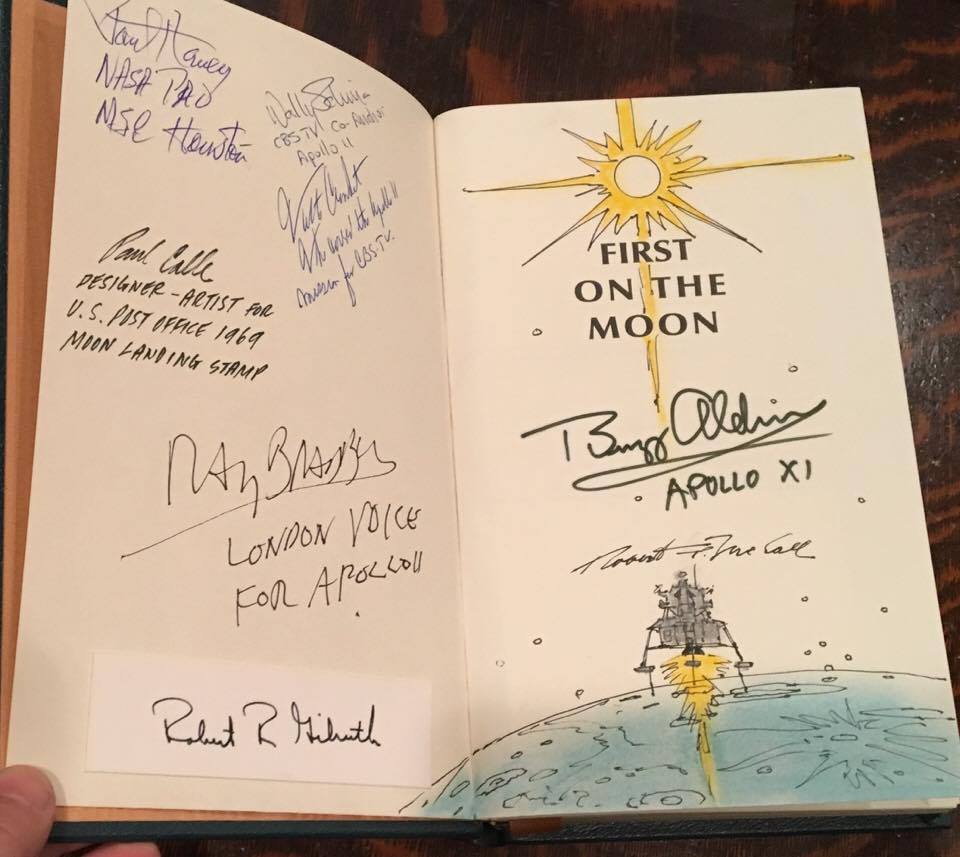 He continued listing some of the other names. They went on for pages, all the blank space in the front and back filled with names and inscriptions from people related to the moon landing. It’s a truly amazing, one-of-a-kind treasure.

As time went on, Huey’s collecting interests broadened. In addition to science fiction and the space program, he has first editions of all of Stephen King’s works (mostly signed), every James Bond book (mostly first editions), there’s collections of military history, aviation, Easton Press leather bound special editions, and more. His recent interest has taken him into fine press editions of his favorites, including a complete set of the Hyperion series by Dan Simmons, who Huey cites as his favorite author. Subterranean Press printed all of Simmons works in very limited “lettered editions” (meaning there are only 26 copies of each made, usually bound by hand and with exceptional paper/materials and art/illustration).

Huey: Ray Bradbury was appearing at Oxford Books (a legendary Atlanta bookstore) at the Peachtree Battle Shopping Center around 1995. Sandra and I stood in a long line to get a couple of books signed. I believe 1 or 2 books for each person was the limit. I took the pencil drawing of Ray Bradbury I had done a few years earlier just in case he would sign it. When I presented the drawing to him he looked at it a minute then looked up at me. He said, “I wish I looked like that now, you did a good job.” He took his pen and started writing on the drawing. I watched and held my breath. He scribbled a large “A+” and then signed his name under it. He said, “That’s your grade. You should draw some really important people and not waste your time on an old pulp writer like me.” 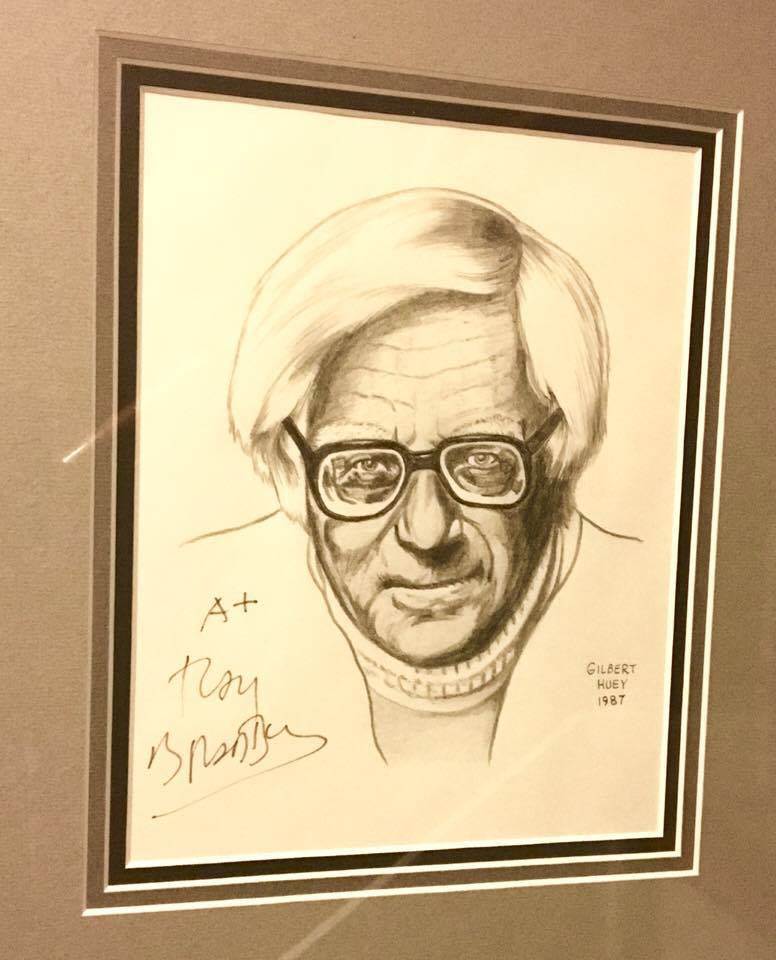 Quick aside -- there's a substantial facebook group of Oxford Books fans HERE that encourages people to share their stories, memories, and photos of good times they had there. It closed down in 1997, before I moved to Georgia, so I never got to experience it.

I want to also highlight the fact that Huey is not only a serious book collector, but an author as well. His book The Free State of Carroll is a historical novel based on real events in the 1830's here in Carrollton, then on the western edge of the Georgia frontier.  Indians, horse thieves, and a desperate vigilante group collide with an indomitable sheriff in a true-life adventure rivaling the best westerns. Readers get a glimpse of the hardscrabble life early Georgians endured and a feel for the volatile political climate that eventually led to the Civil War.  You can purchase copies of The Free State of Carroll at Underground Books.

I'm very grateful to Gilbert Huey for making time to share his library with me, it was an extraordinary treat. If you have a home library or book collection you'd be interested in sharing with Megan or Josh, let us know at info@undergroundbooks.net as it is our intention to make this into a regular series.