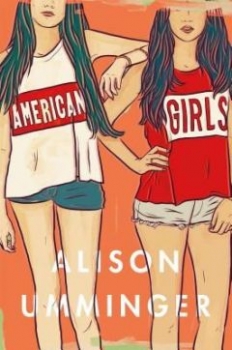 Please consider joining us to celebrate the release of Alison Umminger's new novel American Girls! Buy the book from Underground Books instead of through Amazon, and you'll be entered into a drawing for free door prizes such as new copies of books that inspired or informed the writing of American Girls (including Helter Skelter, Valley of the Dolls, Role Models, and more) and Underground Books t-shirts or tote bags.

Umminger will be at the shop from 6:30-8pm for a book signing and reading. Drop by and get your books signed, or hang out for the reading and Q&A (7pm-ish). Light refreshments will be provided, and we'll have some exclusive American Girl swag/freebies as well!

You can pre-order online at the link below, in person at the shop, or buy your own copy at the door at the time of the event.

She was looking for a place to land.
Anna is a fifteen-year-old girl slouching toward adulthood, and she's had it with her life at home. So Anna "borrows" her stepmom's credit card and runs away to Los Angeles, where her half-sister takes her in. But LA isn't quite the glamorous escape Anna had imagined.
As Anna spends her days on TV and movie sets, she engrosses herself in a project researching the murderous Manson girls—and although the violence in her own life isn't the kind that leaves physical scars, she begins to notice the parallels between herself and the lost girls of LA, and of America, past and present.
In Anna's singular voice, we glimpse not only a picture of life on the B-list in LA, but also a clear-eyed reflection on being young, vulnerable, lost, and female in America—in short, on the B-list of life. Alison Umminger writes about girls, sex, violence, and which people society deems worthy of caring about, which ones it doesn't, in a way not often seen in YA fiction.

"A razor-sharp commentary on our culture, observed with keen wit from the perspective of one honest and complex American girl. An insightful, original take on the coming-of-age story." —Kirkus, starred review
"Bittersweet and true, Anna's journey to self-discovery is one that should be widely read." —ALA Booklist, starred review
"Reveals richly complicated relationships among mothers, daughters, and sisters." —Publishers Weekly, starred review
“Alison Umminger doesn't pull any punches in her debut: Funny, sad, often surprising, and just damned authentic. I know I won't be the only one who didn't want Anna's glittery-dark Hollywood summer to end.” —emily m. danforth, author of The Miseducation of Cameron Post
“The most imaginative novel I've read in years. Incredible and important.” —Kiese Laymon, author of How to Slowly Kill Yourself and Others in America