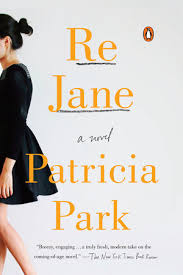 Please consider joining us on March 15th for a special talk by Patricia Park, author of Re Jane.

"Re Jane . . . drolly explore[s] issues of class, ethnicity and women's autonomy for an unlikely heroine of the 21st century."--Maureen Corrigan, NPR

For Jane Re, half-Korean, half-American orphan, Flushing, Queens, is the place she’s been trying to escape from her whole life. Sardonic yet vulnerable, Jane toils, unappreciated, in her strict uncle’s grocery store and politely observes the traditional principle of nunchi (a combination of good manners, hierarchy, and obligation). Desperate for a new life, she’s thrilled to become the au pair for the Mazer-Farleys, two Brooklyn English professors and their adopted Chinese daughter. Inducted into the world of organic food co-ops and nineteenth–century novels, Jane is the recipient of Beth Mazer’s feminist lectures and Ed Farley’s very male attention. But when a family death interrupts Jane and Ed’s blossoming affair, she flies off to Seoul, leaving New York far behind. Reconnecting with family, and struggling to learn the ways of modern-day Korea, Jane begins to wonder if Ed Farley is really the man for her. Jane returns to Queens, where she must find a balance between two cultures and accept who she really is. Re Jane is a bright, comic story of falling in love, finding strength, and living not just out of obligation to others, but for one’s self. Journeying from Queens to Brooklyn to Seoul, and back, this is a fresh, contemporary retelling of Jane Eyre and a poignant Korean American debut.

Patricia Park was born and raised in New York City. She earned her BA in English from Swarthmore College and an MFA in Fiction from Boston University, where she studied with Ha Jin and Allegra Goodman. A former Fulbright Scholar and Emerging Writer Fellow at the Center for Fiction, she has published essays in The New York Times, Slice, and The Guardian. She lives in Brooklyn, New York.

Author Talk will take place at the University of West Georgia's Kathy Cashen Recital Hall, with reception to follow at Underground Books.