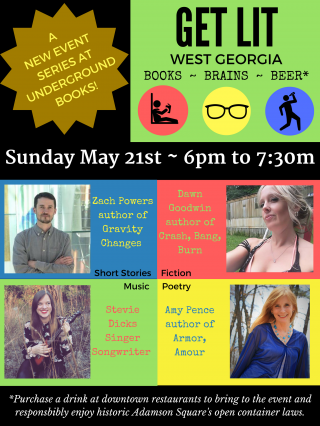 Introducing what we hope will become a regular Underground Books event series -- Get Lit West Georgia!

Feel free to bring along an adult beverage of your choice from a neighboring restaurant and enjoy Adamson Square's open container laws responsibly.

For our debut event we'll have the following guest authors/performers:

ZACH POWERS
Zach Powers co-founded the literary arts nonprofit Seersucker Live. He led the writers’ workshop at the Flannery O’Connor Childhood Home for eight years. His writing for television won an Emmy, and he was a columnist for Savannah Morning News. His prose and exactly one poem have appeared in such journals as Black Warrior Review, The Conium Review, Forklift, Ohio, PANK, the Tin House blog, and elsewhere. Zach Powers splits his time between Fairfax, Virginia and Savannah, Georgia. His debut book, Gravity Changes, will be published this month by BOA Editions.

DAWN GOODWIN
Carroll County resident K. Dawn Goodwin has been turning sex, blasphemy, and bad relationships into literary art since 1986. A graduate of Emory University in Atlanta, Dawn majored in English and Creative Writing, despite her fear-n-loathing of Famous Literature. Her memoir Until He Comes was published by Simon and Schuster in 2011. This past year, Dawn published Crash Bang Burn, an anti-romance novel told through the eyes of three lovers and a postmortem on the bro-country anthems about them pretty little blue-eyed girls that slices open the dark underbelly of sex, marriage, and family in the dirty South. Dawn has most recently released a webseries based on her novel. Dawn wrote, produced, and performed all the major roles in Crossland, which we at Underground Books binged in one sitting and can't wait to see more of.

AMY PENCE
Amy Pence is the author of the poetry collections Armor, Amour (Ninebark Press, 2012), The Decadent Lovely (Main Street Rag, 2010) and the chapbook Skin’s Dark Night (2River Press, 2003). Her poems have appeared in a wide variety of publications, including New American Writing, The Oxford American,
The Antioch Review, and Quarterly West. Her fiction and non-fiction have been published in Silk Road, Poets & Writers, and The Writer’s Chronicle, among others. She earned her M.F.A. from the University of Arizona, and teaches poetry workshops as well as tutoring college students.

STEVIE DICKS
Singer-songwriter Stevie Dicks is a Carrollton resident who blew us away with her musical, comedic, and rather naughty stylings at a variety show at Underground Books not long ago. She is a rising star in the West Georgia scene that is not to be missed.

For our launch event we will keep it free and unticketed. Keep in mind that space is limited in Underground Books and we expect a strong turnout. If you attend please consider supporting the authors by purchasing one of their books. Future events in the series may have a small ticket price that can be applied to a purchase in the store.