Handling rare and antiquarian books, you're bound to fall in love from time to time. We consider placing a treasured book in the right hands an honor, but sometimes we wish we had just a little more time to admire them. These are just a few of the ones that got away, along with our current obsessions.

Songs of Love and War by William Allan 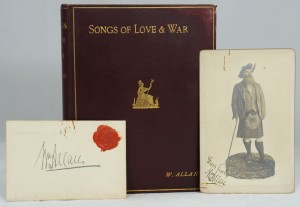 Megan: I dearly loved this 1900 collection of Scottish poetry because of the sad little love story its accompanying ephemera told (with the beautiful gilt-stamped burgundy cloth adding to its charm). This association copy was inscribed by the author to a Miss Juliette Williams, with laid in ephemera: a signed photograph of the author, a love letter on House of Commons stationery with a thick wax House of Commons seal (Sir William Allan (1837-1903) was Member of Parliament for Gateshead), and a slip of paper containing Miss Williams' thoughts of her admirer. From the included letter, William Allan felt quite warmly about the "fair" Miss Williams: "Wert thou! Juliette, the sparkling wine/That glistens in this crystal cup!/I swear! 'twould give me bliss divine/To know I had to drink it up." Unfortunately, in what appears to be a later note to her son, Williams says of Allan: "This Scot was a character, tease, and also my beau, but I thought him too old." Sold: 2015 Fall ICE Salvage. 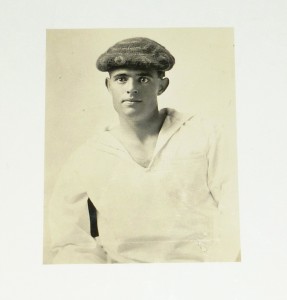 Josh: One of my all time favorite items was a 1904 hand written love letter from Jack London to his mistress. In addition to titillating content relating to London’s affair with Charmian, who would later become his second wife, there is a reference to a “George” who London kisses “on the lips”, possibly a reference to London’s longtime friend and poet George Sterling. A delightful bit of tabloid-style-gossip-insight into London’s romantic life. The letter is unsigned, as London and Charmian were keeping their affair secret at the time.
Contents of letter, in full: 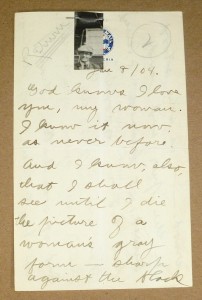 "God knows I love you, my woman. I know it now, as never before. And I know, also, that I shall see until I die the picture of a woman’s gray form – stark against the black crowd – as she stood on the pier-end and kissed, and kissed, and kissed her lover goodbye. I see you now, as clearly as I saw you yesterday and it was better than the last kiss, my darling. It was you, all you & all abandon, there on the ______-piece of the pier kissing your love to me.
And because you could not get the last kiss, no woman got the last kiss from me yesterday. I kissed George on the lips by the gang-planks. Dear Charmian, dear my own. I shall come back, & soon. And we shall be happy, so happy.
There are two correspondents on board with their wives, & how I envy them – not their wives, but the fact that they may take their wives with them, while my true wife remains at home." Sold to The Jack London Bookstore in Glen Ellen California in 2014.

Your Hidden Skeleton: A Novel Autograph Book Which Reveals

the Secret Skeletons of Your Friends Through Their Handwriting

Megan: This 1900's autograph book completely had me. Here's how it worked: "Sign your name with full pen of ink on folded line. Use stub pen. Fold paper while ink is still wet. Writing and folding must be done quickly to obtain good results. Be careful to dot the i, and to place the period at the end of the name." With 21 "skeletons" ranging from 1910-1939 and a printed facsimile example following directions attributed to a twelve year old George Washington, this was a very amusing and truly novel autograph book from the early 20th century. Sold: 2015 Florida Antiquarian Book Fair. 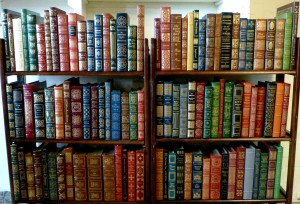 Josh: Often considered the most popular leather bound series ever printed, Easton Press’ 100 Greatest Books of All Time includes famous works of classic literature, history, science, philosophy, and autobiography. They are beautifully bound in leather with 22k gold page edges and accents. Complete sets are uncommon. There are actually 125 volumes that have been printed in this series, but any 100 are considered a "complete" set.  This is a strikingly beautiful set and a decorator’s dream. It was my stubborn romantic insistence that the set remain whole and complete, though we probably could have done much better with them by selling them off individually. Sold: Ebay auction in 2014. 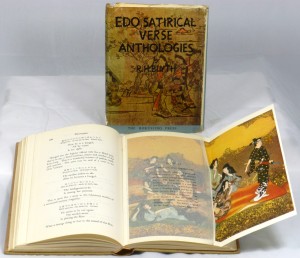 Megan: This was my first big score (found in a Goodwill in the middle of Nowhere, South Georgia), but that's only one of the reasons I loved it so much. For one thing, it had beautiful plates, and each had a delicate tissue guard with printed information regarding the artwork. The author was also a fascinating figure. Reginald Horace Blyth was a serious Japanophile, even unsuccessfully trying to gain citizenship during WWII, who wrote prolifically, passionately, and critically on Japanese literature, art, and culture, particularly Zen philosophy and Japanese poetry, aided in drafting the Ningen Sengen, and even tutored Emperor Akihito in English when he was Crown Prince.  You can see the complexity of his relationship to the country he loved in his preface: "The satirical verses composed during the 18th century in Japan are hardly known to the Japanese people themselves. The present book may help to call them to their sense to their innate sense of humour; to the sense of their unused, unusual heritage of literature; to a sense of power of being understood and appreciated fully all over the world....May this book add to the real, unmilitary, poetical power and glory of Japan." Blyth died in 1967, leaving behind this death poem: "Sazanka ni kokoro nokoshite tabidachinu," translated: "I leave my heart to the sasanqua flower on the day of this journey." The sasanqua is native to Japan. Sold: 2015 Georgia Book and Paper Fair.